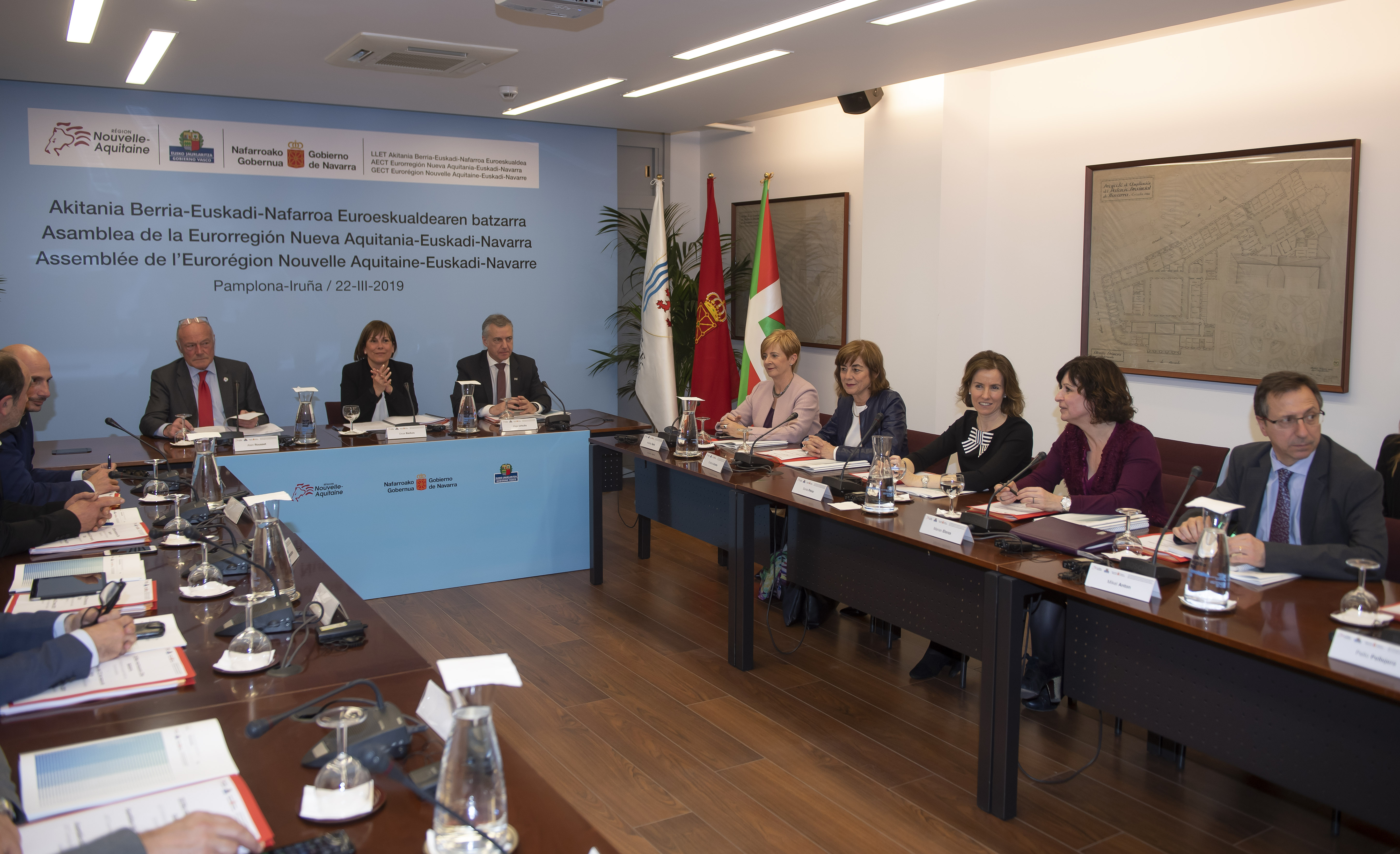 Embed video
Download mp4 video set (zip)
The Lehendakari stresses that the Euroregion is “our meeting point and our foothold when considering the Europe of the future that we want to build together” Source: Irekia 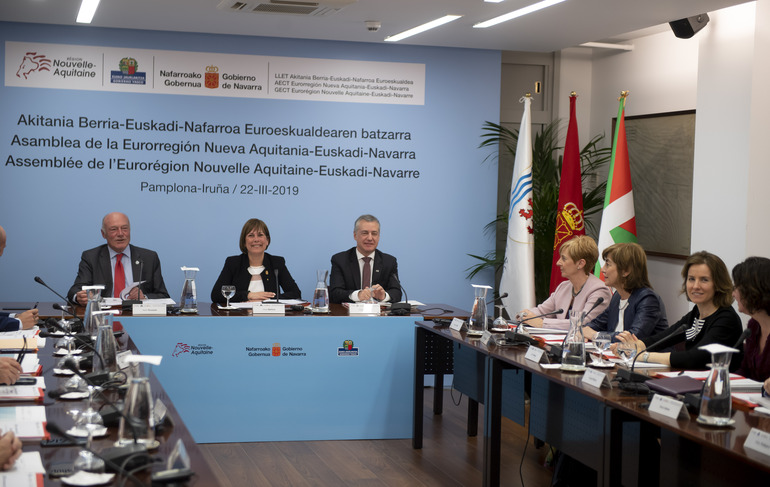 This morning, Lehendakari Iñigo Urkullu, the Basque Premier, took part in the Annual Meeting held by the Nouvelle-Aquitaine/Basque Country/Navarra Euroregion. The leaders of Navarra, Uxue Barkos, and of Nouvelle-Aquitaine, Alain Rousset, heading their respective delegations, also attended the meeting.

The Basque Government's Minister for Economic Development and Infrastructures, Arantxa Tapia, its Minister for Education, Cristina Uriarte, its Minister for Tourism, Trade and Consumption, Sonia Pérez and its Secretary General for External Action, Marian Elorza, travelled to Pamplona with the Lehendakari.

The Lehendakari and the President of Nouvelle-Aquitaine were welcomed by Uxue Barkos at the Seat of the Navarra Government in Pamplona. After the greetings, the three leaders chaired the General Meeting, when the 2018 balance sheet was presented, along with the budgetary projections and grant calls for 2019.

Subsequently, when the three leaders appeared together before the press, the Lehendakari noted that today’s Meeting has reinforced the conviction that the future of the Euroregion is linked to our capacity to work together on initiatives leading to a better quality of life and well-being of the citizens; with a special emphasis on young people. “It is practical application of the “auzolana” philosophy which is known as “partnership” internationally,” he added.

The Lehendakari likewise stressed that positive performance of the Euroregion is a fact-based reality In this regard, the Lehendakari pointed out that 24 new cross-border projects and initiatives have been supported, along with two new strategic partnership.  The Euroregion has managed to attract more EU funds and has received different prizes and awards for the quality of the projects implemented. “We have progressed towards the targets set in the Euroregional Strategic Plan 2020,” he stressed.

In 1992, Navarra, Aquitaine and the Basque Country signed a partnership agreement to develop institutional relations in the sphere of their respective powers, in order to pursue common interests.

However, Navara continued with this cooperation by means of bilateral agreement from the year 2000 onwards. Meanwhile, the Basque Country and Aquitaine, building on this initial protocol, progress towards another cooperation structure regulated by community law and with its own legal personality.  It sought to foster between its members transnational and interregional cooperation, in addition to strictly cross-border cooperation. Therefore, in 2011, they created the European Grouping of Territorial Cooperation (AECT) known as the “Aquitaine/Basque Country Euroregion”.

After the Limousin and Poitou-Charentes regions joined in 2016 and Navarra in March 2017, the Grouping became known as the Nouvelle-Aquitaine - Basque Country - Navarra Euroregion.