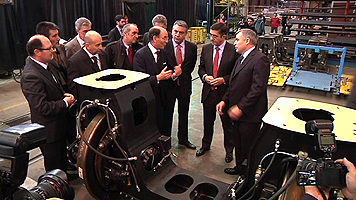 Talgo is an "example" of competitiveness on the global market

Following on from the contract that Talgo has won to build the high-speed train between the holy cities of Medina and Mecca, in Saudi Arabia, the so-called "pilgrims' high-speed train", the Lehendakari stressed that Talgo is an "example of competitiveness" for Basque Companies. The Basque Premier then went on to point out that the company's commitment to innovation and globalisation has enable it to "take on the market, compete and win", thus making it the "mirror of how things should be done".

The Lenhendakari referred to the importance of the high-speed contract awarded to Talgo in Saudi Arabia given its "symbolic" nature and that, according to López, this contract would "catch the attention of the whole Muslim world". Patxi López also stressed the "desire" of the Basque Government, Álava Provincial Council and Talgo itself for more contracts of this type to come to Álava.

This morning, the Lehendakari visited the Talgo plant in Rivabellosa (Álava) and was accompanied by the Talgo CEO, Carlos Palacio Oriol, and by the Chairman of the Álava Provincial Council, Javier de Andrés